Bishop J.V. Porter of Christ Cathedral in Fayetteville, spent the day at his church on Murchison Road.

“Water covered the entire floor,” said Bishop Porter as he surveyed the damage inside.

Walking through the carpeted areas, you could hear the water squishing through the fibers with each step. Church members could be seen throughout, already starting to clean up.

At the height of the flooding, Porter describes the building as sitting in a lake.

“The water was three to five feet high,” Porter said. The church’s portable storage units were swept away by rushing waters.

The church is located next to a creek that overflowed from the overnight rain. The rushing water was so powerful, it even sent two of the church’s portable storage units right through a chain-link fence in the back, floating them right onto the next property.

Porter said they have some drainage issues, but that they haven’t had this bad of flooding at this location in about three to five years.

The aftermath of the heavy rain was felt through the entire county. Throughout the early morning and day, the rising waters closed dozens of roadways. The water even washed part of Sykes Pond Road away. 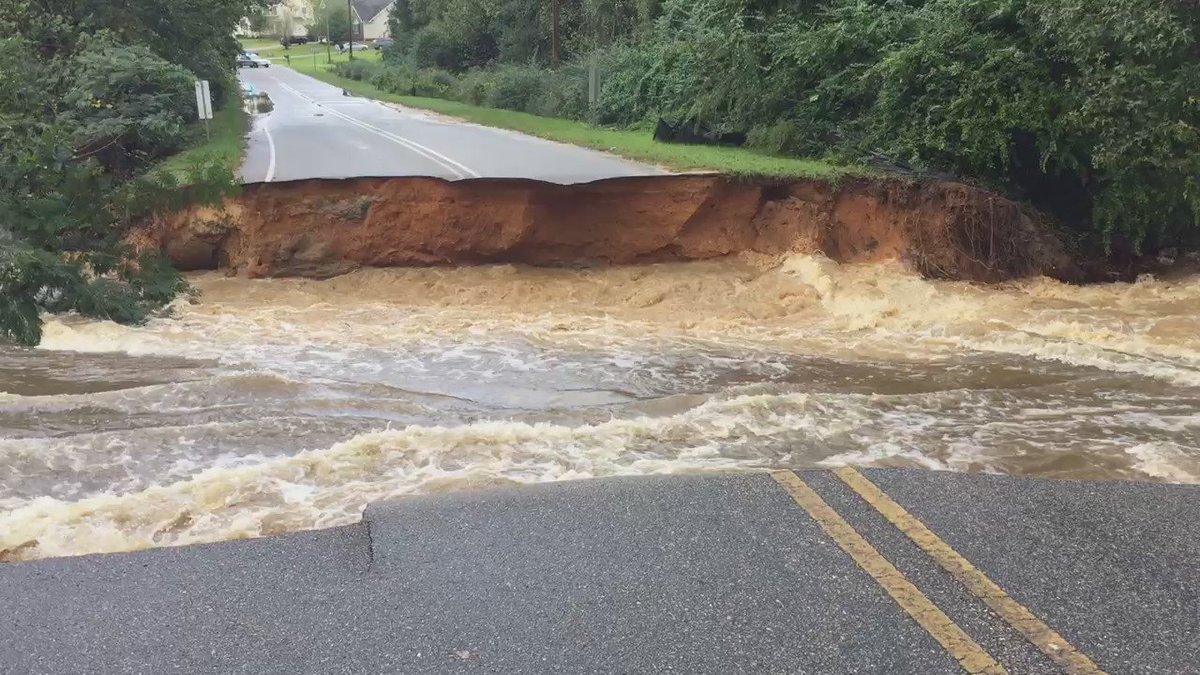 Cars could be seen half under water, stranded in parking lots. The danger even closed schools and sparked states of emergency.

“We’re trying to ask folks if you don’t have to come out in these areas that are flooded, please don’t put first responders’ lives and your own lives at risk,” said Fayetteville Interim Police Chief Anthony Kelly.

At the height of the flood, there were more than 20 water rescues in the county.

Residents watched as the water started to recede throughout the day and reveal the damage left behind.

“We already contacted the insurance company they’re getting back with us to see where we are with this process,” Porter said.

On Thursday afternoon, Cumberland County Schools announced schools would be closed Friday for students. All athletic activities and other after-school activities for Friday have been canceled, including high school football games.

It will be an optional teacher workday.

Fayetteville Mayor Nat Robertson has declared a state of emergency. At a news conference Thursday afternoon, he urged residents to be careful if they have to travel.

“Know before you go,” he said “Don’t drive into standing water.”

Authorities released a 911 call from a man who said he didn’t see water and drove into it at Ames St. and Bragg Blvd. He said he couldn’t swim and was trying not to panic as the water reached the top of his doors.

May Spill Over throughout State – Tropical Depression Eight to Bring Rain

A tropical storm warning has been issued for portions of the Outer Banks of North Carolina.

Tropical Depression Eight will be a nuisance to your last-minute summer getaway to the Outer Banks of North Carolina through Wednesday.

A tropical storm warning has been issued for portions of the Outer Banks of North Carolina. This means tropical storm-force winds are expected within the warning area in the next 24 hours or less.

Winds greater than 39 mph are possible in the tropical storm warning area within the next 24 hours.

The depression was centered about 70 miles south of Cape Hatteras, North Carolina, as of late Tuesday morning.

T.D. Eight still has a chance to strengthen if the convection can persist near the center of circulation, but has been quite disorganized so far Tuesday.

As the forecast path from the National Hurricane Center shows, this system will hug the Outer Banks of North Carolina through early Wednesday. Thereafter, a cold front will move across the Northeast and will likely whisk it away from the rest of the East Coast.

The red-shaded area denotes the potential path of the center of the tropical cyclone. Note that impacts (particularly heavy rain, high surf, coastal flooding) with any tropical cyclone may spread beyond its forecast path.

There will be three main impacts from this system, mainly from Tuesday into early Wednesday:

Check back with us at weather.com for updates on this system.

Storms popped up across the ABC11 viewing area Wednesday evening, bringing high winds and hail and knocking down trees.

At the height of the storm, more than 9,300 Duke Energy customers were reportedly without power in Wake County alone, and more than 5,500 outages in Durham County. The total across the state was reported at more than 34,000.

In Durham, the strong winds toppled large trees at Woodlawn Memorial Park off Miami Boulevard. The falling trees tore large holes in the ground and knocked over gravestones. About 15 were damaged.

Right across the street from the cemetery, the Vargas Family spent Thursday picking up branches, leaves, and debris at their property. Even the little ones were helping with the massive cleanup effort.

“We were like ‘Oh my Gosh.’ We look at our back yard and our furniture is flying away!” said Ahtziri Vargas. More than 60 million East Coasters from Georgia to New York are under the threat of severe weather Sunday. A severe thunderstorm watch was issued this afternoon spanning from northern Virginia to New York City, covering Washington D.C, Baltimore and Philadelphia, until 10 p.m.

Torrential rain was reported in Raleigh, North Carolina, and storms in Gillsville, Georgia, had already brought down trees and damaged homes. 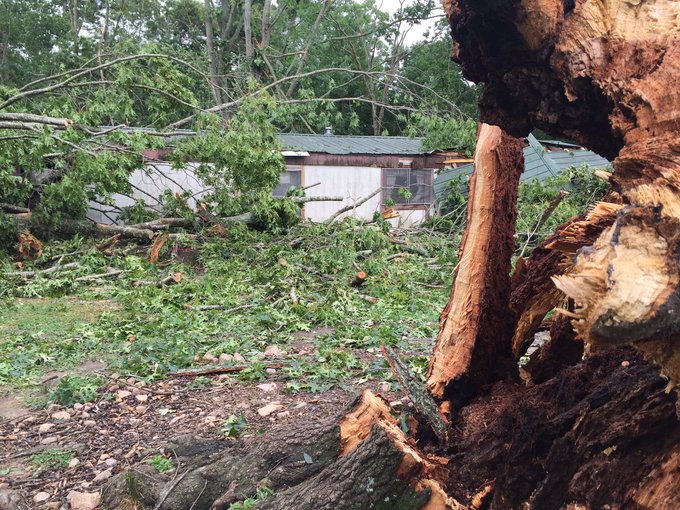 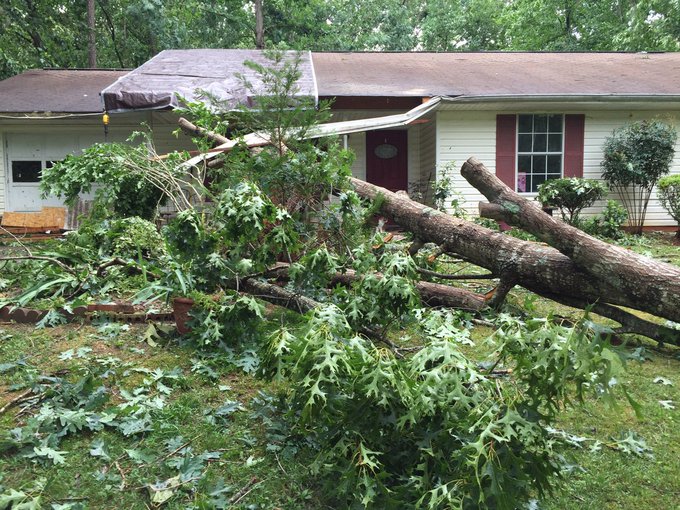 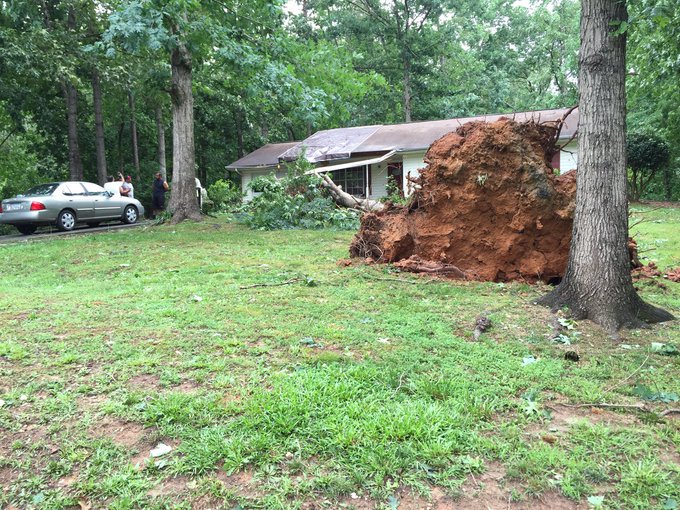 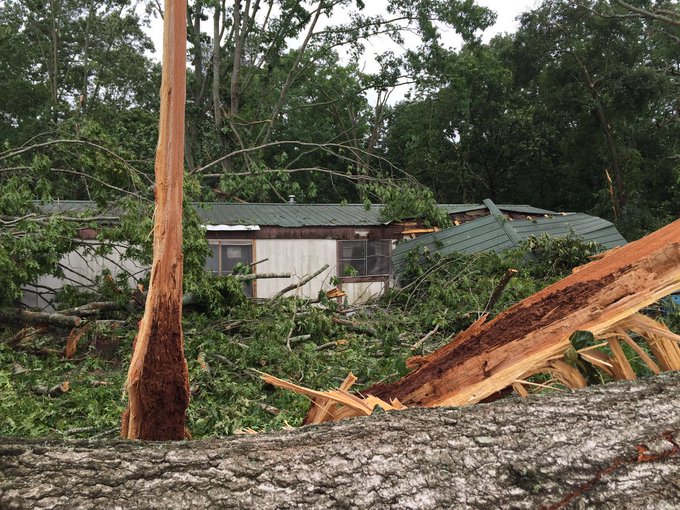 There is no severe weather threat along the East Coast Monday.

Meanwhile, a separate storm system in the southern Gulf of Mexico is threatening parts of Florida’s west coast, as a tropical depression strengthened into Tropical Storm Colin Sunday afternoon. With winds at 40 miles per hour, the storm is moving north towards Tampa at 9 miles per hour.

The National Hurricane Center forecast calls for this system to make a landfall along the northwestern Florida coast, near the “big bend,” by Monday evening. This system could bring heavy rain and possible flash flooding across northern Florida; as much as three inches of rain is expected with higher amounts possible.

Flooding – Fun for the Kids Only! Fix your flooding basement in WNC.

Your basement flooding can replace the spring trip to the beach. Although, not very good for the rest of the family unless the kids have great boogie boards.

AquaDry offers fast and easy services and quotes to stop flooding basements and permanently seal your most valuable possession (besides the kids).

Veterans Day is going to be wonderful for any outdoor activities. Mostly sunny skies today with a few high cirrus clouds. Temperatures will be warm, in the upper 60s to low 70s. Partly cloudy skies tonight and not as cold, with lows in the upper 40s for most.

A cold front will move through the region tonight and early tomorrow. A few showers possible early Thursday, mainly in the high mountain regions. Otherwise, sunshine expected Friday, but cooler temperatures. Highs Friday and Saturday will stay in the 50s with lows dropping below freezing.