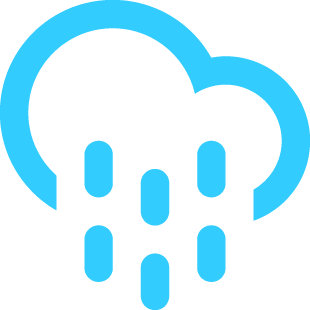 Rain and sometimes high winds has pelted much of central North Carolina, causing flooding concerns in some parts of the viewing area,

As Tuesday began, the National Weather Service in Raleigh issued a flash flood warning for several central counties, including:

The flood warning ended at 6 a.m.

Thunderstorms producing heavy rain have drenched those areas. Already, one to three inches of rain have fallen. 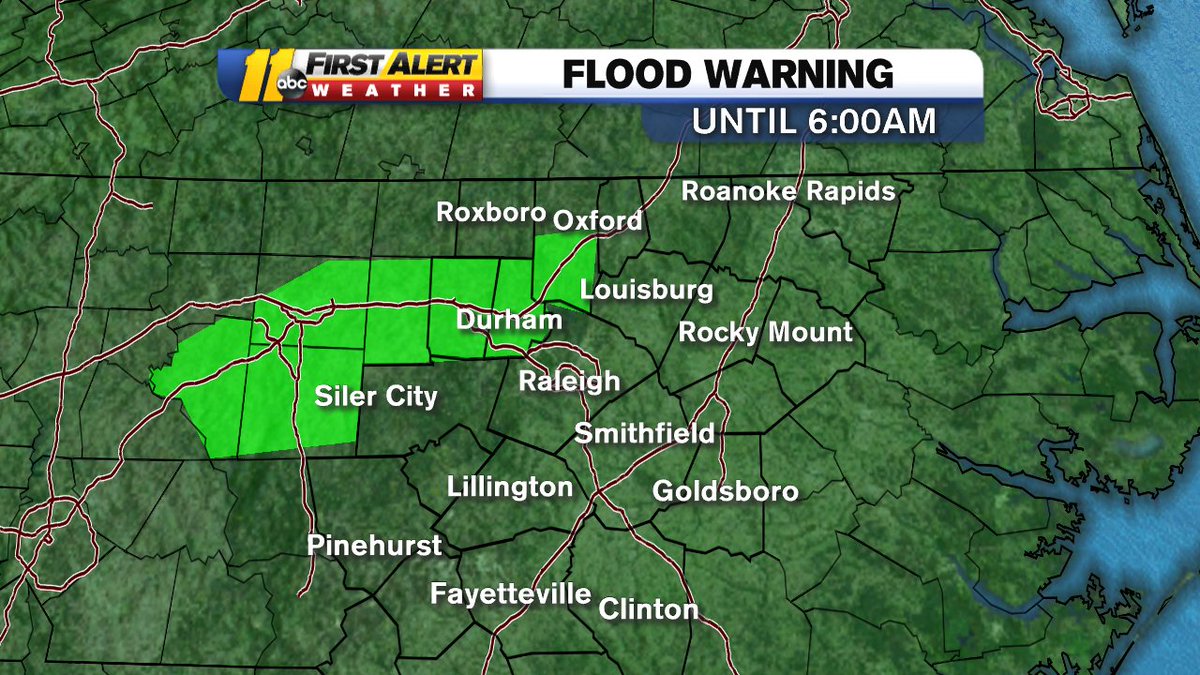 Excessive runoff from the heavy rain could cause flash flooding of creeks and streams, roads, low lying and poor drainage areas. Do not drive your vehicle into areas where water covers the road. Many roads and intersections in the area will quickly flood. When encountering flooded roads, turn around, don’t drown. 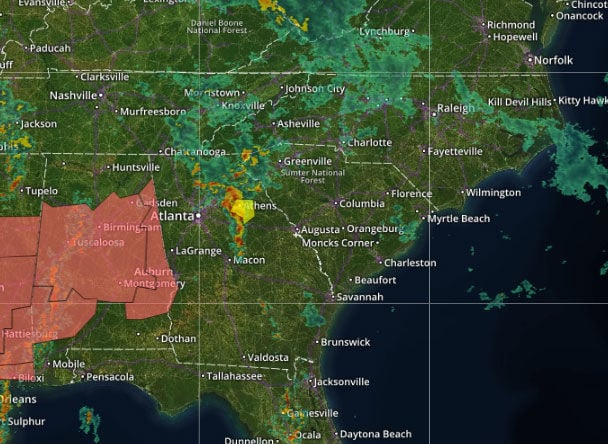 The storm will combine with a cold front moving toward the Carolinas from the Upper Midwest, producing clouds with the rain amid tropical conditions, said Dave Samuhel, a meteorologist with Accuweather in State College, Pa.

“We have to watch out,” Samuhel said. “Any downpours could bring localized flooding and ponding on the roads. It will be wetter in Boone than in Winston-Salem.”

The weather could bring isolated showers and thunderstorms today to the Triad and areas in the state’s western counties, said Kathleen Carroll, a meteorologist with the National Weather Service in Raleigh.

The arrival of the remnant of Cindy in the Southeast will coincide with the typical early summer weather pattern in Forsyth and Guilford counties in which moisture from the Gulf of Mexico mixes with the daytime heat to produce afternoon thunderstorms, Carroll said.

The Triad might receive ½ to ¾ inches of rain while the foothills and mountains could get up to 1½ inches of rain, said Andrew Loconto, a weather service meteorologist in Blacksburg, Va. Wind gusts could reach 50 mph in Northwestern North Carolina, he said. Steady rain could result in flooding in some areas, Loconto said.

For the second consecutive week, the state’s 100 counties aren’t in any drought, according the U.S. Drought Monitor Map. The state has experienced surplus rainfall for the past month, said David Miskus, a meteorologist with the Climate Prediction Center in College Park, Md.

The Triad and some areas of Northwest North Carolina have received heavy rain since May 1, the weather service said. Piedmont Triad International Airport recorded 9.12 inches of rain so far this month, and 7.12 inches in May.

“From the foothills to the Piedmont, we have been totally soaked in the last couple of weeks,” Loconto said.

BURGAW, NC (WWAY) — Hundreds of people came out to enjoy the event that continues to grow each year.  This was the 14th annual festival and there was something for everyone to enjoy.

Events included music, a 5K, shagging contest, food and of course lots and lots of blueberries.

The town was excited to celebrate in their favorite shade of blue, despite the weather.

“It was a little bit rainier then we had hoped, but it’s been a lot of fun. It brings the community together, it brings people in the Burgaw, which is really good. You want to bring others in show them what a great community we are in,” 2017 Miss NC Blueberry Festival Queen Kayleigh Riker said.

If you missed out on the fun this year, the festival is every year on the third Saturday in June.

Storms bringing heavy rain and possible quarter-sized hail are moving into the Charlotte metro region. Here’s what you need to know.

CHARLOTTE, NC — Storms moving into the Piedmont of North Carolina Tuesday evening are expected to develop Tuesday afternoon into the evening and will bring with them heavy rainfall and lightning, according to the National Weather Service.

Some of the storms could spur severe weather with damaging wind gusts and quarter-sized hail, NWS said June 13 in a hazardous weather alert.

NWS’ alert extends through Tuesday, and no hazardous weather is expected later in the week, according to the service. (Sign up for our free daily newsletters and Breaking News Alerts for the Charlotte Patch. iPhone users can download the Patch app in the App Store. Plus, like Charlotte Patch on Facebook.)

RALEIGH, N.C. — Chilly Tuesday temperatures around central North Carolina will kick off a week-long forecast that includes plenty of chances for rain.

A stationary storm front sliced through the state on a diagonal from the northwest counties down to southeast counties on the coast. That front will help funnel storms into the region for the rest of the week.

“This is going ot be our pattern for today, tomorrow, really all the way into Saturday,” said WRAL meteorologist Elizabeth Gardner. “This front is just going to sit here, and the moisture is going to ride right along it.”

On Tuesday, small showers will pop up throughout the day, but more widespread rain will hold off until the early evening, Gardner said.

“Timing these little disturbances coming through is a little difficult,” Gardner said. “But I do expect that this afternoon—several of the computer models do show that about the time of the evening commute that band of rain coming on through.”

Gardner said because of the incoming front and varying cloud, do not expect temperatures to remain constant this week.

“These temperatures tell a pretty amazing story with much cooler temperatures than we’re use to this time of year,” Gardner said.

“This tells you what impact sunshine has as we get into May. As the sun comes out later, it will warm things up pretty quickly. But we’re stuck in the cloud cover right now.”

Temperatures will fluctuate all week, topping out in the mid-60s on Tuesday, spiking to near 80 on Wednesday and Thursday, and dropping back into the 60s for the end of the week.

The constant, though, is the chance for rain, which lingers all the way into Saturday and could soak some weekend graduation events.

Eyes on basements! Heavy rain coming. If you see water, schedule a free consult with AquaDry.

Tuesday, April 18, 2017 06:37AM
The front that moved through last night will leave behind a shower or two today, along with lots of clouds. After seven straight days of high temperatures in the 80s, it will be much cooler today with temperatures rising no higher than the 60s.

High pressure building in over the northeastern U.S. will ridge southward tonight. That will lead to mostly dry weather for most of the region during that time. But then, as the high moves off to the east and the surface ridge breaks down, lower-level winds will turn more out of the south and southeast. This will usher moist air back into the region tomorrow and that leads to a few hit-and-miss showers.

That warm front will move north of the region late tomorrow and we will be back into an unseasonably warm weather pattern for both Thursday and Friday as readings warm back into the 80s.

The front will become stationary over Central North Carolina on Friday night and Saturday.

As another storm system approaches from the west, the stalled front will move northward as a warm front on Sunday, triggering a shower or thunderstorm over parts of the region.

That front will force the front through Central North Carolina on Sunday night and Monday with showers and thunderstorms.

Have a great Tuesday!

Don’t be these guys! It’s more fun to get a home waterproofing consult, fix it early, and take your savings to a real water park. The soils in North Carolina are tough on homes and many homeowners will have foundation problems at some point. Cracks in the walls, and doors and windows that stick shut and unlevel floors are all common signs of foundation problems. If you start to notice these issues in your home, it is important to have a professional inspect your foundation. Wall cracks left alone will continue to get worse which can lead to expensive repairs. Taking care of these issues sooner rather than later will save you money.

If you find yourself in need of foundation repair, follow these quick tips. Find a reputable company that is customer oriented and uses quality foundation piers. If you know nothing about foundation piers, research them online. Also, ask about their warranties. There are several different types of piers and many will not fix your foundation permanently. The foundation piers are going to protect your home, so it is important that they are quality piers.

At AquaDry Waterproofing & Structural Reinforcement, we use DynaPier® foundation piers to repair home foundations. The reasons are simple, the DynaPier® has several distinct advantages over the competition. The DynaPier® was built to last and provides superior strength other piers can not match. Benefits of the DynaPier®

For example, the DynaPier® is one of the only piers on the market that is constructed of both concrete and steel. It uses the strength of both to permanently support your home. Second, it is installed directly beneath the foundation, which means that the foundation will not be weakened by drilling into it. Several companies drill holes into the footing which can compromise the structural integrity of the footing.

Another huge benefit is that the DynaPier® is pressed all the way to bedrock or hard strata, until it reaches the point of resistance. This means that the pier is pressed until it can’t be pushed any further. Most other companies use piers that rely on the friction from the soil to hold them in place. When the soil shrinks and expands due to weather conditions these piers settle and so does the house they’re supposed to be holding up.

It’s easy to see why our piering system is superior to our competition. If your foundation shows signs of settling, like cracks in the walls and ceilings, doors and windows that stick or unlevel floors. Give us a call.